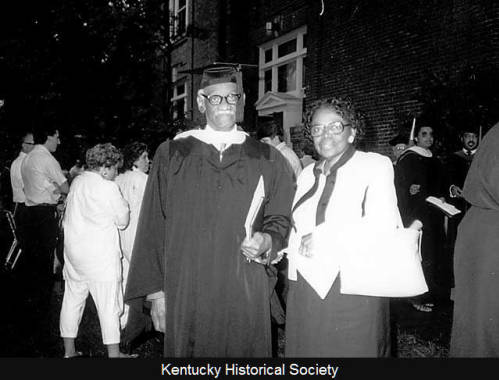 To begin our Black History Month series we will recognize a historic figure, whose remarkable efforts at Kentucky State reminds us of what it means to be a Thorobred.

Many Kentucky State students, staff, and faculty pass by the plaza named after the late Dr. Henry Ellis Cheaney. The area across from “the yard” near the flag pole is dedicated to the respected Dr. Cheaney, a pioneer for black historians in the state of Kentucky.

A monument located in front of the Carl M. Hill Student Center dedicated in Dr. Cheaney’s honor identifies him as an active student on campus. He ran track, played football, and served as an editor on the school newspaper; he also used his knowledge and skills to be a student teacher.

His work reached beyond his service as a student. Immediately after graduating, he became a history professor at Kentucky State University, but also served as the debate team coach, boxing coach, college chaplain, director of college publicity, supervisor of the college YMCA, and college alumni agent.

He was a prominent figure in the compilation of Kentucky’s black history into one space. His collection of African American history was used towards public school textbook: Kentucky’s Black Heritage, which he co-authored. Dr. Cheaney submitted an article for the Encyclopedia International.

He was married to Mrs. Ora-Mae Williams Cheaney, who was a native of Henderson, KY, and attended Kentucky State College and earned a Bachelor of Science Degree.

He died at age 94 in Frankfort, Kentucky.

His legacy has inspired many others after him to continue the work he has started for Kentucky State University and African Americans in the state of Kentucky.